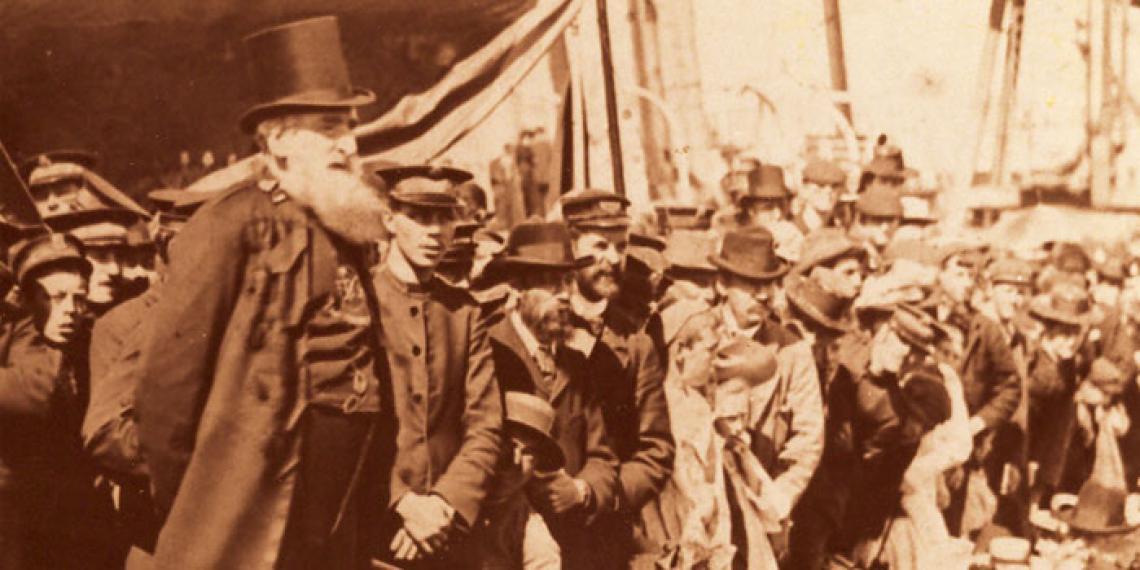 History of The Salvation Army

At that time, William Booth was working as an itinerant evangelist. He had accepted an invitation to conduct evangelistic meetings in the East End of London. The appalling conditions experienced by Britain's working classes led William and Catherine Booth to focus their efforts on the poorest of the working classes, known at that time as the 'Submerged Tenth' of society.

Their mission was to preach Christianity to the masses, but William and Catherine Booth were realists. They recognised that in addition to spiritual rebirth, the people to whom their ministry was directed needed physical, emotional and social restoration as well as material assistance.

In 1878, the name of the Christian Mission was changed to The Salvation Army. The work of The Salvation Army spread quickly from London to many parts of the world. The rapid growth was aided by a quasi- military command structure, which allowed for quick decisions, fast implementation of policy and flexibility in the use of resources.

The vision of William and Catherine Booth is the basis of The Salvation Army's work today.

The Salvation Army in New Zealand

New Zealand in the 1880s was a young country of rich potential, but an economic depression was creating unemployment, poverty, social distress and violence. Responding to requests to help those affected by the depression, William sent two Salvation Army officers to New Zealand in 1883.

The two officers, Captain George Pollard and Lieutenant Edward Wright, brought with them a bank draft of 200 pounds and three Australian Salvationists. Between them they established The Salvation Army in New Zealand.

Within a short time, Army centres had been opened in 21 cities and towns, and 'flying brigades' serviced country areas. Soldiers were enrolled, bands formed, individuals persuaded to accept Jesus, and the Salvationist message was preached.

During its 130-plus years of operation in New Zealand, the Army has used many expressions of practical Christianity to 'take the gospel' (good news) to the people.

The Army has carried its social services to people of all ages, regardless of culture, financial position, religious belief or social class.

The many Salvation Army expressions of practical Christianity have included homes for the elderly, children and disadvantaged, places of refuge for women and children, treatment centres for alcohol and drug dependants, and the appointment of chaplains in hospitals, prisons and the armed forces.

The Salvation Army in Fiji

Although visits had been made as early as 1904, the work of the Salvation Army in Fiji officially began in 1973. The previous year a team from New Zealand undertook a ’10-day trek’ to explore the need for The Salvation Army to commence operations in Fiji. The team was under the leadership of Captains Brian and Beverley McStay who became the first leaders of the work in Fiji.

By April of 1973 the first corps was established. Initially named Bagasau Corps, it was later renamed Suva Central Corps.

There was a deliberate focus on providing solutions to contemporary social issues and in 1974 farm land at Lomaivuna was acquired for a youth rehabilitation scheme and Sunday meetings started there on 15 March 1975.

In 1975 the Citadel at Raiwai (Suva) was built to accommodate the new Raiwai Corps and social welfare centre. By 1978 there were 70 soldiers on the roll and the rehabilitation hostel was accommodating and training up to 33 young men at any one time, three-quarters having been convicted of crimes. This early involvement with offenders lead to the establishment of the Court and Prison ministry.

The process of establishing corps and social service centres across the country continues.

Fiji has experienced three military coups in recent times; 1987, 2000 and 2006, and has only recently returned to democracy (2014). In the midst of this social upheaval Fijian Salvationists have shown themselves to be a resilient people who continue to make progress and advancement for the Kingdom of God.

The Salvation Army in Tonga

Following the successful establishment and consolidation of The Salvation Army in Fiji, further expansion into the Pacific Islands was considered. The work of The Salvation army in Tonga officially commenced at the end of 1985 under Fijian officers, Captains Tifare and Rebecca Inia. Within five months the Captain’s report to THQ described:
•    Daily 5am prayer meetings.
•    17 family services held (average attendance of 34).
•    3 couples ready to be sworn in as Soldiers.
•    The establishment of the home league and a work scheme.
•    Hospital and prison visitation.

In 1987 a fishing vessel was purchased and a fishing work scheme commenced yielding work, income and souls saved. Consolidation of the work continued with the acquisition of land and construction of a hall for the Nuku’alofa Corps which was opened on 31 December 1989.

A significant extension of The Salvation Army’s work and influence occurred in 1998 with the opening of the Alcohol and Drug Awareness Centre.

The Salvation Army in Tonga has always enjoyed the support of the Tongan monarchy. The Tonga District report of 31 March 2000 noted that the Army had been invited to expand its presence in Kolovai and that the Princess Nanasi’pau had offered land there for the establishment of a kindergarten and that she would “like to see the Army establish a worshipping congregation at Kolovai in a style that would attract the younger generation.”

The current Tongan Regional leaders, Captains Sila and Malia Siufanga are Tonga’s first indigenous leaders and were appointed to that role in 2014 after having served at Midland (NZ) DHQ.

The Salvation Army in Samoa

Following consultation with the International Management Council, General André Cox approved the official recognition of Salvation Army work in the Independent State of Samoa (formerly known as Western Samoa). The official start of work was August 2018.

In 1984, contact was first made with the Samoan authorities by the then-regional commander in Fiji. A further contact was made in 2001 and, following receipt of a letter from the Prime Minister of Samoa in 2017, it was felt that the time was now right to engage in moves to seek official registration for The Salvation Army, and to appoint officers to begin to develop plans for a ministry there.

In his correspondence from March 2017, Prime Minister, Tuila’epa Sa’illele Malielegaoi, expressed a keen interest in having The Salvation Army begin work on the islands, citing drug and alcohol dependency as key issues he felt The Salvation Army could address. He wrote: ‘I like to think you were divinely guided ... to bring the good news of your work for Samoa.’

Plans were soon put in place to establish a corps (church) and an addiction treatment centre. Violence against women and children was another key area that was suggested as a focus for the Army’s ministry. Sunday meetings have been taking place since May 2018, and employees, engaged to be involved in the addictions programme, began work in June.

With legal registration now in place, along with an approved budget for the first three years, and officers appointed to lead the work – Lieut-Colonels Rod and Jenny Carey (regional officers), along with Major Miriama Simanu (planting officer) –work was developed under the auspices of Salvation Army leadership in New Zealand.

To reflect the new opening, the name of the territory was updated to New Zealand, Fiji, Tonga and Samoa Territory.